Polar pilots are unique members of the human species. Take for example, the Kenn Borek Air family. I first encountered a small group of these fearless and entertaining pilots at the Airport Hotel in Resolute Bay, Nunavut, in April 2011. (Resolute is one of Canada’s northernmost communities.)

I marvelled at stories of their trips to Antarctica and the North Pole in extremely, unforgiving weather conditions. They transported scientists, politicians, academics, locals and more.  I heard one story about an allegedly wealthy man from the Middle East who wanted to have his picture taken at the North Pole, just for fun. Apparently, he insisted on wearing his traditional flowing – very non-Arctic – attire for the occasion.

The crew shared plenty of good factoids. A young male pilot working for Kenn Borek Air, told me that: “Many inhabitants of our planet are hugely ignorant when it comes to polar geography.” His words still resonate: “Can you believe it that some people actually believe that penguins live up in the North Pole and that polar bears live in Antarctica?”

It turns out that the aviator had a point. According to a special report in April/ May 2011’s “Up Here” magazine, titled, The North Poll: “28 per cent of southern Canadians believe there are penguins in the Arctic. A further 46 per cent said they didn’t know. That leaves a measly 25 per cent who were correct.”  The survey also concluded that: “38 per cent of Canadians don’t know the term Inuit replaced the term Eskimo.”

Flying pole to pole, these specialized pilots and their passengers advance polar science and knowledge whether one is a geologist or tourist. In small, closely knit Arctic communities, tragedies hit hard and everybody feels the pain of losing comrades. The First Air crash of August 20, 2011, just outside Resolute Bay, that killed 12 people (only three passengers survived) had a huge impact on everybody in the North.

I knew one of the casualties, arctic scientist Marty Bergman, who was the late director of the Polar Continental Shelf Program. He effused enthusiasm in an interview I conducted with him in July 2011 aboard Canada’s largest icebreaker the CCGS Louis S. St-Laurent. “This is a tremendously exciting time to be involved in Arctic work.  You can’t pick up a newspaper in this country and not see some article about the Arctic,” he said standing on the icebreaker’s helicopter landing pad. “The science brings stories. To me, that to have a discussion amongst Canadians and amongst people around the global biosphere about the North is extremely important.”

Marty loved the North: “I find immense beauty in this part of the world. The fact that we are thousands of kilometres away from cities, anywhere in the world, makes this a very, very special place.  The fact that I’ve been lucky enough over the years to have been here and shared information with others, makes it very special.” Marty devoted his life to arctic science. 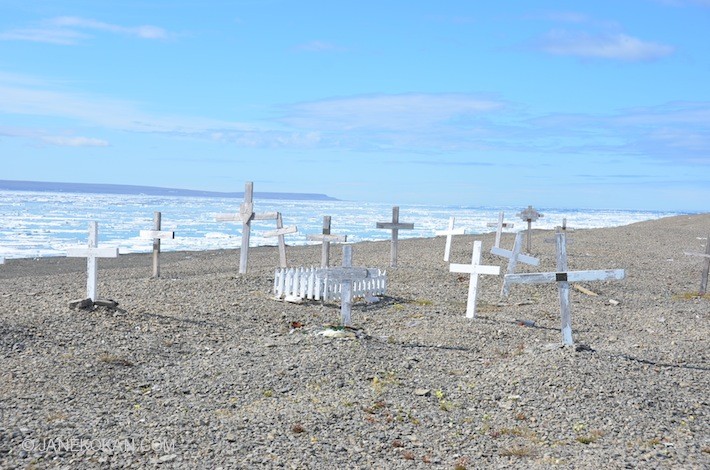 As did others before him. I visited the final resting site of polar scientist Alan W. Reece, near Resolute Bay, close to where his plane crashed on May 28, 1960.

Reece had participated in two British Antarctic expeditions from 1945 -52. The Journal of Glaciology’s tribute to Reece reads: “As a member of the Norwegian-British-Swedish Antarctic Expedition of 1949-52 his hard work and drive in arranging the details of stores and equipment were much appreciated as were his frank and lively comments, and his capacity for friendship.” The obituary continues: “In 1959 Reece, joined the prospecting firm of J.C. Sproule and Associates in Canada. While working from Resolute on 28 May 1960, his light plane landed to help another plane down on the sea ice. Whiteout conditions which had developed at the time caused his plane to crash during the return to Resolute.” I wonder, how many family and friends have visited his grave site? Just so they know, it is well preserved. 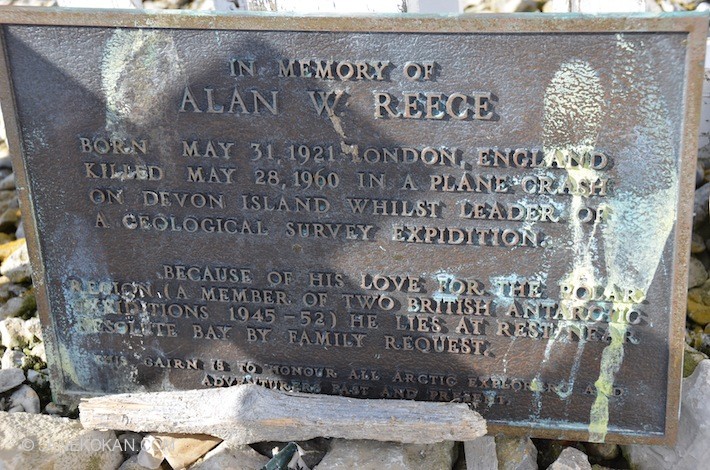 Polar pilots and polar scientists do sometimes, unfortunately, pay the ultimate price. Sadly, the three Canadian crew of a Twin Otter owned by Kenn Borek Air Ltd. – Mike Denton, Perry Andersen and Bob Heath – were killed when their plane crashed into Mount Elizabeth in Antarctica on January 23, 2013. The  plane was intending to fly between the South Pole and an Italian base in Antarctica’s Terra Nova Bay.

The three Canadian aviators presently lie in a frozen grave in Antarctica.  Search and rescue crews based in Antarctica say that will try to get the bodies out in October 2013, when the Antarctic winter is over and a new research season begins. The recovery is going to be a most challenging exercise as the wreckage is about 3,900 metres above sea level up the mountain.

The pilots that I met in Resolute Bay, loved flying the Twin Otter, a versatile plane that is able to land on skis, wheels or floats. I vividly remember seeing one of Kenn Borek’s signature red, white and black Twin Otters, dancing around in the howling Arctic wind, appearing to attempt a take-off in white-out conditions. The aircraft certainly wasn’t going anywhere, but its pilots were itching to fly. They had a mission.

May these souls rest in peace.