A full version of this article is available for download.
[dt_divider style=”wide”/] 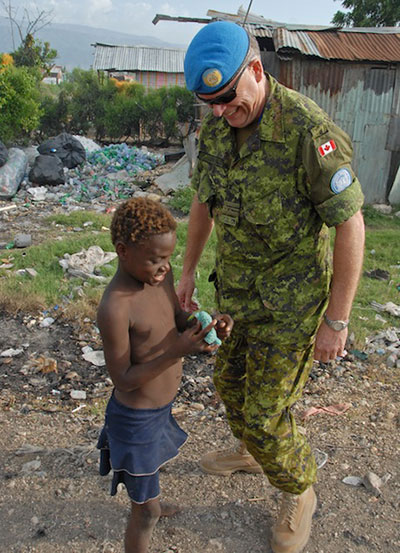 Lieutenant Commander Ian Cook, Chief of Staff coordinator for the mission MINUSTAH, speaks to a child that lives beside this main garbage depot in Port-Au-Prince. Many Haitian families live in this unsanitary environment. Photo by Sgt Robert Comeau Army News, Combat Camera. June 23, 2008 in Port-Au-Prince, Haiti.

“Peace is the only battle worth waging.” – Albert Camus. Algerian-born French author and philosopher.

There was a time when the maple leaf and the “blue beret” were practically synonymous. “Team” Canada helped form the United Nations. Former Prime Minister Lester B. Pearson is viewed as one of the founding“ fathers” of modern peacekeeping. He was awarded the Nobel Peace Prize in 1957 for his initiative to create the first peacekeeping force – the United Nations Emergency Force (UNEF) – to resolve the Suez Crisis. Since 1947, more than 125,000 Canadians have participated in UN and NATO peacekeeping missions.

Dr. Walter Dorn, a professor of Defence Studies at the Royal Military College of Canada (RMC) and the Canadian Forces Staff College, points out that during the Cold War, Canada was a top peacekeeping contributor. “By the time the Nobel Prize was awarded to UN peacekeepers in 1988, Canada had provided about 10 per cent of all troops – more than any other nation,” says Dorn.

By the early 1990s Canada was at its peacekeeping zenith. Over 50,000 Canadian men and women had become peacekeepers. According to Dorn, by 1992, at least one-third of CF members were serving in UN missions including: the former Yugoslavia, the Golan Heights, Cyprus, Somalia and elsewhere. Canada had participated in every peacekeeping force created by the UN until 1995. This began to fall, especially as larger UN missions were established. But, Dorn affirms that Canada remained in the top 10 list until 1997.

Over 130 countries have contributed to UN peacekeeping in its history. “The UN numbers have been pretty constant for the last few years, says Dorn. You have got roughly 100,000 uniformed personnel in the field, slightly less than that now. You have between 20,000 to 25,000 civilians added on to that. So in total, you get around 120,000 to 125,000 peacekeepers in the field in UN peacekeeping – and those are from all nations.”

Dorn says that Canada is “at an all time low in Canadian military contributions to peacekeeping” while the UN has maintained an all time high in the number of peacekeepers in the field. He adds: “Our main contribution in terms of personnel – in the new century – was in the Golan Heights (over 200 military personnel) and we withdrew that contingent in 2006. In fact it was March 2006, just after the Conservative Government came into power.”

Meanwhile countries like India and Bangladesh are presently contributing around 7,000 troops
each for UN missions as per the January 31, 2013 UN peacekeeping operations monthly summary. According to the document, Canada is providing only 11 troops. The U.S. is contributing 19 soldiers.

Dr. Dorn asserts that the rise in demand for peacekeeping has been most notable in Africa, where more than 86,000 peacekeepers are now deployed in places like South Sudan, Darfur, Democratic Republic of Congo, Côte d’Ivoire and Liberia.

He adds: “Some current missions still lack the troop levels mandated by the UN Security Council. Contributions from countries with peacekeeping expertise and advanced military and logistics capabilities like Canada are much needed to increase effectiveness and reduce operational overstretch.”

By the mid 1990’s Canada like other Western countries began to partake in UN-sanctioned military missions through NATO – instead of contributing direction to the UN – in Afghanistan, Kosovo and Bosnia and Herzegovina.

Today, most peacekeeping missions contain “enforcement” elements because they are authorized under Chapter VII of the UN Charter, which allows for the use of force where necessary to implement the UN mandate. These “robust” missions stand in sharp contrast to the more traditional form of lightly armed peacekeepers, which were authorized under Chapter VI of the UN Charter.

However, Canada is still the eighth largest contributor of funds to UN peacekeeping. “That is because we have an assessed contribution and we have a long standing reputation of paying our dues in full and on time, unlike the United States,” says Dorn. “And that’s a major help for the UN because it’s reliable; it’s sustainable funding that’s coming. It’s mandatory funding, it’s not voluntary funding but it’s still something that they can rely on, so that’s an important contribution to peacekeeping.”

According to NATO, there are 138,000 military personnel engaged in NATO missions around the world.

How much does peacekeeping cost?

“Like any human activity, UN peacekeeping is not perfect”, says Dorn. “But the levels of corruption are not higher than experienced in the US operations in Afghanistan and Iraq. In the end, peacekeeping is a much more effective and efficient use of funds than invading forces. The two mentioned coalition operations spent over a trillion dollars in the past decade.”