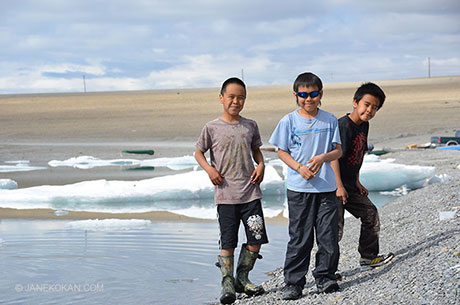 I first visited Canada’s newest territory, Nunavut, which encompasses a large chunk of Arctic Canada, at the time of its “creation” in April 1999. I was immediately awestruck by its people, wildlife, remoteness and geography. It was incredible to see polar bears roaming the dizzying Arctic landscape just as it was to sample traditional Inuit food including caribou and Arctic char. I experienced 24-hour summer daylight and round-the-clock darkness in winter. I also came face-to-face with Nunavut’s massive social problems including: the lack of affordable housing, substance abuse, high rates of violent crime and heartbreaking suicide rates (10 times the Canadian average).

More recently, I have filmed with the Canadian Forces in the North and met the amazing Canadian Rangers, known as “the eyes and ears of the North.” One Ranger in Resolute Bay taught me the basics of igloo building and threw in a tutorial on ice fishing. I discovered that the ink in pens freezes at extremely frigid temperatures and sheepishly had to borrow a pencil from a search and rescue technician. And how could I could I forget a heart pounding skidoo ride through a snow blizzard on limb-breaking ice?

I spent time aboard Canada’s largest icebreaker, the CCGS Louis S. St-Laurent, whose principal mission is to support Arctic science and seabed mapping. As she navigated the Northwest Passage, I found myself humbled by the Arctic’s geography. The “Louis” the first Canadian ship to reach the North Pole has definitely been a witness to climate change over the years.

The Arctic melt happening faster than at any time in the planet’s history. Nunavut is a busy place these days: full of prospectors, scientists, tourists, artists and bureaucrats. It is also the full-time home to the majority of Canada’s Inuit, many of whom hunt their food, which includes seal, walrus, beluga and caribou. Many can’t afford the astronomical cost of Western food that has to be flown in or brought up by barge during the summer season. Sadly, many Inuit do not always feel that they are part of the “dialogue” up North.

As Arctic politics take centre stage today, Canada and the other Northern nations must confront shared polar realities including: aboriginal relations, protecting the fragile Arctic environment, climate change and the new economics. There is a development boom underway, including trans-Arctic shipping, oil and gas development and tourism.

Whether you are talking to an Inuit hunter or a defence spokesperson, sovereignty means different things to different people.